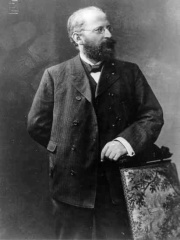 Eduard Bernstein (German: [ˈeːduaʁt ˈbɛʁnʃtaɪn]; 6 January 1850 – 18 December 1932) was a German social democratic Marxist theorist and politician. A member of the Social Democratic Party of Germany (SPD), Bernstein had held close association to Karl Marx and Friedrich Engels, but he began to identify what he believed to be errors in Marxist thinking and began to criticize views held by Marxism when he investigated and challenged the Marxist materialist theory of history. Read more on Wikipedia

Eduard Bernstein was a socialist who believed that socialism could be achieved gradually through peaceful and democratic means.

Among politicians, Eduard Bernstein ranks 809 out of 15,577. Before him are Stanisław August Poniatowski, Paul of Greece, Valentinian I, Christian X of Denmark, Ecgberht, King of Wessex, and Arthur Henderson. After him are Ferdinand VII of Spain, Wilhelm Frick, Pedro I of Brazil, Justin Trudeau, Robert F. Kennedy, and Édouard Daladier.