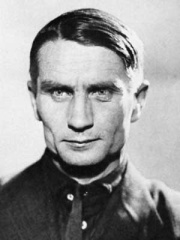 Trofim Denisovich Lysenko (Russian: Трофим Денисович Лысенко, Ukrainian: Трохи́м Дени́сович Лисе́нко, Ukrainian pronunciation: [troˈxɪm deˈnɪsowɪtʃ lɪˈsɛnko]; 29 September [O.S. 17 September] 1898 – 20 November 1976) was a Soviet agronomist and pseudo-scientist. He was a strong proponent of Lamarckism, and rejected Mendelian genetics in favour of his own idiosyncratic, pseudoscientific ideas later termed Lysenkoism.In 1940, Lysenko became director of the Institute of Genetics within the USSR's Academy of Sciences, and he used his political influence and power to suppress dissenting opinions and discredit, marginalize, and imprison his critics, elevating his anti-Mendelian theories to state-sanctioned doctrine.Soviet scientists who refused to renounce genetics were dismissed from their posts and left destitute. Hundreds if not thousands of others were imprisoned. Read more on Wikipedia

Trofim Lysenko is most famous for his work in the field of genetics. He was a proponent of the idea that organisms are shaped by their environment, and that they could be altered by changing the environment.

Among BIOLOGISTS In Ukraine