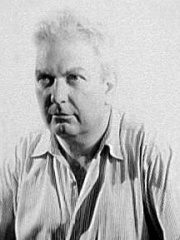 Alexander Calder (; July 22, 1898 – November 11, 1976) was an American sculptor known both for his innovative mobiles (kinetic sculptures powered by motors or air currents) that embrace chance in their aesthetic, and static "stabiles" monumental public sculptures. He didn't limit his art to sculptures; he also created paintings, jewelry, theatre sets and costumes.Calder preferred not to analyze his work, saying, "Theories may be all very well for the artist himself, but they shouldn't be broadcast to other people."Born into a family of artists, Calder's work first gained attention in Paris in the 1920s and was soon championed by the Museum of Modern Art in New York, resulting in a retrospective exhibition in 1943. Major retrospectives were also held at the Solomon R. Read more on Wikipedia

Alexander Calder is most famous for his mobiles, which are sculptures that hang from the ceiling and move with the air currents.

Among SCULPTORS In United States