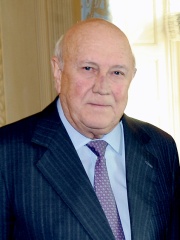 Frederik Willem de Klerk (, Afrikaans: [ˈfriədərək ˈvələm də ˈklɛrk]; born 18 March 1936) is a South African politician who served as State President of South Africa from 1989 to 1994 and as Deputy President from 1994 to 1996. As South Africa's last head of state from the era of white-minority rule, he and his government dismantled the apartheid system and introduced universal suffrage. Read more on Wikipedia

Since 2007, the English Wikipedia page of F. W. de Klerk has received more than 1,766,938 page views. His biography is available in 69 different languages on Wikipedia making him the 1,108th most popular politician.

Among politicians, F. W. de Klerk ranks 1,102 out of 14,801. Before him are Astyages, Numerian, Yang Guifei, Ptolemy IX Lathyros, Takeda Shingen, and John III of Portugal. After him are Napoléon, Prince Imperial, Kenan Evren, Ladislaus I of Hungary, Justin Trudeau, Alexander Kolchak, and Wenceslaus III of Bohemia.