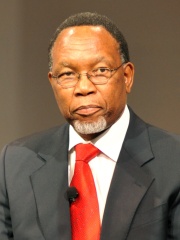 Kgalema Petrus Motlanthe (Tswana pronunciation: [ˈkxɑ.le.mɑ mʊ.ˈtɬʼɑ.n.tʰɛ]; born 19 July 1949) is a South African politician who was South Africa's third president between 25 September 2008 and 9 May 2009, following Thabo Mbeki's resignation. Thereafter, he was deputy president under Jacob Zuma until 26 May 2014. Raised in Soweto in the former Transvaal after his family was forcibly removed from Alexandra, Motlanthe was recruited into UMkhonto we Sizwe, the armed wing of the African National Congress (ANC), after he finished high school. Read more on Wikipedia

Among politicians, Kgalema Motlanthe ranks 6,310 out of 15,577. Before him are Kusaila, Yejong of Goryeo, Emperor Shizong of Jin, Haxhi Lleshi, Filip Vujanović, and Eugene Maurice, Count of Soissons. After him are Nureddin al-Atassi, Takelot I, Sergius I of Constantinople, Sabium, Ermesinde of Carcassonne, and Alexandru Averescu.