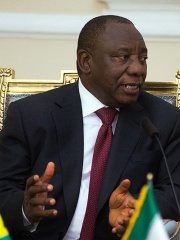 Matamela Cyril Ramaphosa (born 17 November 1952) is a South African businessman and politician who serves as the fifth president of South Africa since 2018 and president of the African National Congress (ANC) since 2017. Previously an anti-apartheid activist, trade union leader and businessman, Ramaphosa served as secretary general to ANC President Nelson Mandela, deputy president to President Jacob Zuma, and chairman of the National Planning Commission from 2014 to 2018. He has been called a skillful negotiator and strategist who acted as the ANC's Chief Negotiator during South Africa's transition to democracy. Read more on Wikipedia

Among politicians, Cyril Ramaphosa ranks 4,582 out of 15,710. Before him are Stepan Shaumian, Ben Carson, Madame Nhu, Amyntas I of Macedon, Takahito, Prince Mikasa, and Toomas Hendrik Ilves. After him are Sviatoslav II of Kiev, Aristides Pereira, Cynisca, Tancredo Neves, Honoré IV, Prince of Monaco, and Bahram IV.