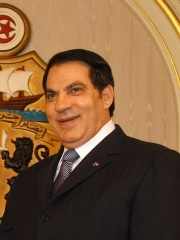 Zine El Abidine Ben Ali (Arabic: زين العابدين بن علي‎, Zayn al-'Ābidīn bin 'Alī; 3 September 1936 – 19 September 2019), commonly known as Ben Ali (Arabic: بن علي‎) or Ezzine (Arabic: الزين‎), was a Tunisian politician who was the second President of Tunisia from 1987 until his fall in 2011 after the revolution of Tunisia . Ben Ali was appointed Prime Minister in October 1987. He assumed the Presidency on 7 November 1987 in a bloodless coup d'état that ousted President Habib Bourguiba by declaring him incompetent. Read more on Wikipedia

Zine el abidine ben ali is most famous for being the president of Tunisia from 1987 to 2011.

Among politicians, Zine El Abidine Ben Ali ranks 739 out of 15,710. Before him are Hugo Chávez, Boudica, Publius Quinctilius Varus, Ngo Dinh Diem, Alexis of Russia, and Henry I of England. After him are Cleopatra I Syra, Otto III, Holy Roman Emperor, Phocas, Conrad II, Holy Roman Emperor, Anastasius I Dicorus, and Benjamin Harrison.