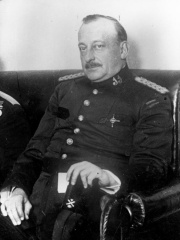 Miguel Primo de Rivera y Orbaneja, 2nd Marquess of Estella (8 January 1870 – 16 March 1930), was a dictator, aristocrat, and military officer who served as Prime Minister of Spain from 1923 to 1930 during Spain's Restoration era. He deeply believed that it was the politicians who had ruined Spain and that by governing without them, he could restore the nation. His slogan was "Country, Religion, Monarchy." Historians depict him as an inept dictator who lacked clear ideas and political acumen, and who alienated his potential supporters such as the army. Read more on Wikipedia

Among politicians, Miguel Primo de Rivera ranks 1,335 out of 15,710. Before him are Theodor Heuss, Lucullus, Qin Er Shi, Harald Hardrada, Makarios III, and Creon. After him are Ahaz, Berengar I of Italy, Mentor, Baldwin II of Jerusalem, Ghazan, and Gregor Strasser.