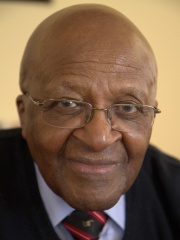 Desmond Mpilo Tutu (born 7 October 1931) is a South African Anglican cleric and theologian, known for his work as an anti-apartheid and human rights activist. He was the Bishop of Johannesburg from 1985 to 1986 and then the Archbishop of Cape Town from 1986 to 1996, in both cases being the first black African to hold the position. Read more on Wikipedia

Desmond Tutu is most famous for his work as a human rights activist. He was the first black Archbishop of Cape Town and he was awarded the Nobel Peace Prize in 1984.

Among RELIGIOUS FIGURES In South Africa

Among religious figures born in South Africa, Desmond Tutu ranks 2. Before him are Sarah Baartman (1788). After him are Wilfrid Napier (1941) and Faf du Plessis (1984).