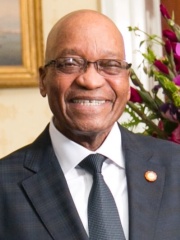 Jacob Gedleyihlekisa Mhlanganyelwa Zuma (Zulu: [geɮʱejiɬeˈkisa ˈzʱuma]; born 12 April 1942) is a South African politician who served as the fourth President of South Africa from the 2009 general election until his resignation on 14 February 2018. Zuma is also referred to by his initials JZ and his clan name Msholozi.Zuma served as Deputy President of South Africa from 1999 to 2005, but was dismissed by President Thabo Mbeki in 2005 after Zuma's financial adviser, Schabir Shaik, was convicted of soliciting a bribe for Zuma. Zuma was nonetheless elected President of the African National Congress (ANC) on 18 December 2007 after defeating Mbeki at the ANC conference in Polokwane. Read more on Wikipedia

Since 2007, the English Wikipedia page of Jacob Zuma has received more than 4,126,498 page views. His biography is available in 78 different languages on Wikipedia making him the 2,062nd most popular politician.

Among politicians, Jacob Zuma ranks 2,048 out of 14,801. Before him are Emperor Higashiyama, Hyejong of Goryeo, Wang Jingwei, Álmos, James III of Scotland, and Sigismund of Burgundy. After him are Archduke Maximilian Francis of Austria, Nelson Rockefeller, Anne Neville, Wen Jiabao, Richard of York, 3rd Duke of York, and Porus.