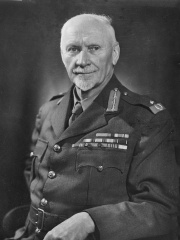 Field Marshal Jan Christian Smuts, (24 May 1870 – 11 September 1950) was a South African statesman, military leader and philosopher. In addition to holding various military and cabinet posts, he served as prime minister of the Union of South Africa from 1919 to 1924 and 1939 to 1948. Smuts was born to Afrikaner parents in the British Cape Colony. Read more on Wikipedia

Jan Smuts was a South African statesman and military leader. He was the only person to sign both the peace treaty ending the First World War and the charter of the United Nations.

Among politicians, Jan Smuts ranks 3,705 out of 15,710. Before him are Calpurnia, Antoine Quentin Fouquier-Tinville, Hedwig Eleonora of Holstein-Gottorp, Emperor Yingzong of Song, Cleisthenes of Sicyon, and Yelü Dashi. After him are Ottavio Farnese, Duke of Parma, Charlotte of Mecklenburg-Strelitz, Chlothar IV, Nicholas Francis, Duke of Lorraine, Senakhtenre Ahmose, and David I of Scotland.