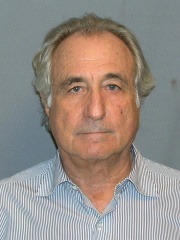 Bernard Lawrence Madoff ( MAY-doff; April 29, 1938 – April 14, 2021) was an American fraudster and financier who ran the largest Ponzi scheme in history, worth about $64.8 billion. He was at one time chairman of the NASDAQ stock exchange. He advanced the proliferation of electronic trading platforms and the concept of payment for order flow, which has been described as a "legal kickback". Madoff founded a penny stock brokerage in 1960, which eventually grew into Bernard L. Read more on Wikipedia

Bernie Madoff is most famous for being the mastermind behind the largest Ponzi scheme in history. He was sentenced to 150 years in prison for his crimes.