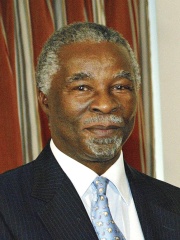 Thabo Mvuyelwa Mbeki (Xhosa: [tʰaɓɔ mbɛːkʼi]; born 18 June 1942) is a South African politician who was the second president of South Africa from 14 June 1999 to 24 September 2008, when he resigned at the request of his party, the African National Congress (ANC). Before that, he was deputy president under Nelson Mandela between 1994 and 1999. The son of Govan Mbeki, a renowned ANC intellectual, Mbeki has been involved in ANC politics since 1956, when he joined the ANC Youth League, and has been a member of the party's National Executive Committee since 1975. Read more on Wikipedia

Among politicians, Thabo Mbeki ranks 2,697 out of 15,577. Before him are Emperor Momozono, Al-Hadi, Charles II, Duke of Parma, Childebert II, Hissène Habré, and Hyeokgeose of Silla. After him are Thomas of Lancaster, 1st Duke of Clarence, Wilhelm Karl, Duke of Urach, Valdas Adamkus, George Plantagenet, 1st Duke of Clarence, Arsinoe III of Egypt, and Maharana Pratap.