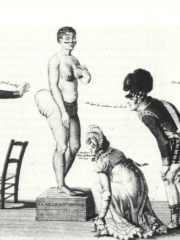 Sarah Baartman (Afrikaans: [ˈsɑːra ˈbɑːrtman]; c.1789– 29 December 1815), also spelt Sara, sometimes in the diminutive form Saartje (Afrikaans pronunciation: [ˈsɑːrtʃi]), or Saartjie, and Bartman, Bartmann, was a Khoikhoi woman who was exhibited as a freak show attraction in 19th-century Europe under the name Hottentot Venus, a name which was later attributed to at least one other woman similarly exhibited. The term "Hottentot" was the colonial-era term for the indigenous Khoekoe (formerly known as Khoikhoi) people of the southwestern area of Africa. The women were exhibited for their steatopygic body type uncommon in Western Europe which not only was perceived as a curiosity at that time, but became subject of scientific interest, albeit of racist bias frequently, as well as of erotic projection. Read more on Wikipedia

Sarah Baartman was a South African woman who was taken from her home by European explorers and exhibited in freak shows in Europe. She was later brought back to Europe and died there.

Among RELIGIOUS FIGURES In South Africa