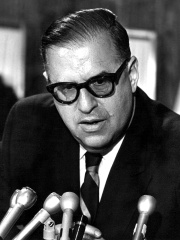 Abba Solomon Meir Eban ( (listen); Hebrew: אבא אבן [ˈ(ʔ)aba ˈ(ʔ)even]; born Aubrey Solomon Meir Eban; 2 February 1915 – 17 November 2002) was an Israeli diplomat and politician, and a scholar of the Arabic and Hebrew languages. During his career, he served as Foreign Affairs Minister, Education Minister, and Deputy Prime Minister of Israel. He was the second ambassador to the United States and the first Permanent Representative of Israel to the United Nations. Read more on Wikipedia

Among politicians, Abba Eban ranks 5,991 out of 15,710. Before him are Grimoald the Younger, Leo V, King of Armenia, Curtis LeMay, Gaius Claudius Marcellus Minor, Louis, Prince of Hesse and by Rhine, and Saad Al-Salim Al-Sabah. After him are Charaton, Fu Jian, Maria Miloslavskaya, Frederick II, Landgrave of Hesse-Kassel, John II, Duke of Schleswig-Holstein-Sonderburg, and Kamehameha II.