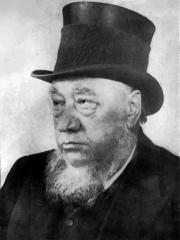 Stephanus Johannes Paulus "Paul" Kruger (Afrikaans pronunciation: [ˈkryjər]; 10 October 1825 – 14 July 1904) was a South African politician. He was one of the dominant political and military figures in 19th-century South Africa, and President of the South African Republic (or Transvaal) from 1883 to 1900. Nicknamed Oom Paul ("Uncle Paul"), he came to international prominence as the face of the Boer cause—that of the Transvaal and its neighbour the Orange Free State—against Britain during the Second Boer War of 1899–1902. Read more on Wikipedia

Since 2007, the English Wikipedia page of Paul Kruger has received more than 1,041,776 page views. His biography is available in 40 different languages on Wikipedia making him the 1,913th most popular politician.

Among politicians, Paul Kruger ranks 1,900 out of 14,801. Before him are Rupert, King of Germany, Muhammad Ali Jinnah, Yang Shangkun, Ḫattušili III, Adolfo Suárez, and Dagobert III. After him are Werner von Fritsch, Louise of Lorraine, Æthelred I, King of Wessex, Kubrat, Halfdan the Black, and Maria Sophie of Bavaria.