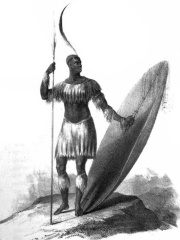 Shaka kaSenzangakhona (c. July 1787 – 22 September 1828), also known as Shaka Zulu (Zulu pronunciation: [ˈʃaːɠa]) and Sigidi kaSenzangakhona, was the founder of the Zulu Kingdom from 1816 to 1828. He was one of the most influential monarchs of the Zulu, responsible for re-organizing the military into a formidable force via a series of wide-reaching and influential reforms. Shaka was born in the lunar month of uNtulikazi (July) in the year of 1787 near present-day Melmoth, KwaZulu-Natal Province, the son of the Zulu chief Senzangakhona. Read more on Wikipedia

Shaka is most famous for being the hand signal for "hang loose" or "peace."

Page views of Shakas by language

Among politicians, Shaka ranks 1,020 out of 15,710. Before him are B. R. Ambedkar, John I of Portugal, Hamid Karzai, Yazdegerd III, Joachim Gauck, and James Madison. After him are Sebastian of Portugal, Mohammad Mosaddegh, Cleopatra Selene II, Édouard Daladier, Agrippina the Elder, and Demetrius I of Macedon.