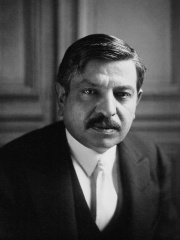 Pierre Jean Marie Laval (French pronunciation: ​[pjɛʁ laval]; 28 June 1883 – 15 October 1945) was a French politician. During the time of the Third Republic, he served as Prime Minister of France from 27 January 1931 to 20 February 1932, and a second time from 7 June 1935 to 24 January 1936. A socialist early in his life, Laval became a lawyer in 1909 and was famous for his defense of strikers, trade unionists and leftists against government prosecution. Read more on Wikipedia

Pierre Laval was most famous for his involvement in the Vichy government during World War II.

Among politicians, Pierre Laval ranks 1,079 out of 15,710. Before him are Clement Attlee, Xuande Emperor, Baldur von Schirach, Isaac II Angelos, Robert I of France, and Empress Gi. After him are Chongzhen Emperor, James A. Garfield, Rama, Christian III of Denmark, Faisal I of Iraq, and Psamtik I.