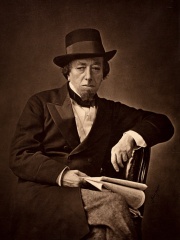 Benjamin Disraeli, 1st Earl of Beaconsfield, (21 December 1804 – 19 April 1881) was a British statesman and Conservative politician who twice served as Prime Minister of the United Kingdom. He played a central role in the creation of the modern Conservative Party, defining its policies and its broad outreach. Disraeli is remembered for his influential voice in world affairs, his political battles with the Liberal Party leader William Ewart Gladstone, and his one-nation conservatism or "Tory democracy". Read more on Wikipedia

Benjamin Disraeli was a British politician who served as Prime Minister of the United Kingdom from 1868 to 1874 and again from 1880 to 1885. He was the first and only British Prime Minister to have been born Jewish.

Among politicians, Benjamin Disraeli ranks 934 out of 15,577. Before him are Chaim Weizmann, Basil II, Andrew II of Hungary, Sebastian of Portugal, Frederick William, Elector of Brandenburg, and Louis V of France. After him are Kurt Waldheim, Gustav IV Adolf of Sweden, Park Geun-hye, Ptolemy IV Philopator, Balbinus, and Ali Pasha of Ioannina.