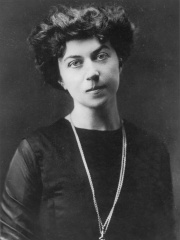 Alexandra Mikhailovna Kollontai (Russian: Алекса́ндра Миха́йловна Коллонта́й, née Domontovich, Домонто́вич; 31 March [O.S. 19 March] 1872 – 9 March 1952) was a Russian revolutionary, politician, diplomat and Marxist theoretician. Serving as the People's Commissar for Welfare in Vladimir Lenin's government in 1917–1918, she was a highly prominent woman within the Bolshevik party and the first woman in history to become an official member of a governing cabinet.The daughter of an Imperial Russian Army general, Kollontai embraced radical politics in the 1890s and joined the Russian Social Democratic Labour Party (RSDLP) in 1899. During the RSDLP ideological split, she sided with Julius Martov's Mensheviks against Lenin's Bolsheviks. Read more on Wikipedia

Alexandra Kollontai was a Russian Marxist revolutionary, feminist, and diplomat. She was one of the most important figures in the Bolshevik government after the October Revolution.

Among DIPLOMATS In Russia

Among diplomats born in Russia, Alexandra Kollontai ranks 1. After her are Viktor Chernomyrdin (1938) and Vatslav Vorovsky (1871).