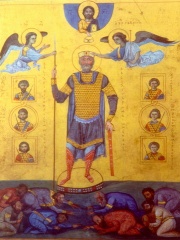 Basil II Porphyrogenitus (Greek: Βασίλειος Πορφυρογέννητος Basileios Porphyrogennetos; 958 – 15 December 1025), nicknamed the Bulgar Slayer (Greek: ὁ Βουλγαροκτόνος, ho Boulgaroktónos), was the senior Byzantine emperor from 976 to 1025. He and his brother Constantine VIII were crowned before their father Romanos II died in 963, but they were too young to rule. The throne thus went to two generals, Nikephoros Phokas (r. Read more on Wikipedia

Basil II, also known as Basil the Bulgar Slayer, was the Byzantine Emperor from 976 to 1025. He was a skilled military leader who expanded the empire's borders and strengthened its military.

Among politicians, Basil II ranks 929 out of 15,577. Before him are Jugurtha, Lee Myung-bak, Benjamin Harrison, Lev Kamenev, Jiang Qing, and Chaim Weizmann. After him are Andrew II of Hungary, Sebastian of Portugal, Frederick William, Elector of Brandenburg, Louis V of France, Benjamin Disraeli, and Kurt Waldheim.

Among people born in 958, Basil II ranks 2. Before him is Vladimir the Great. After him are Samuel of Bulgaria and Otto-William, Count of Burgundy. Among people deceased in 1025, Basil II ranks 1. After him are Bolesław I the Brave, Sei Shōnagon, Hugh Magnus, Matilda of Germany, Countess Palatine of Lotharingia, Muhammad III of Córdoba, Burchard of Worms, and Helena.