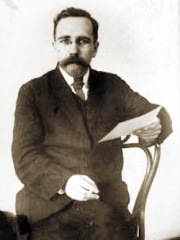 Lev Borisovich Kamenev (né Rozenfeld; 18 July [O.S. 6 July] 1883 – 25 August 1936) was a Bolshevik revolutionary and a prominent Soviet politician. Born in Moscow to parents who were both involved in revolutionary politics, Kamenev attended Imperial Moscow University before becoming a revolutionary himself, joining the Russian Social Democratic Labour Party (RSDLP) in 1901 and was active in Moscow, Saint Petersburg and Tiflis (now Tbilisi). He took part in the failed Russian Revolution of 1905. Read more on Wikipedia

Lev Kamenev was a Russian revolutionary who was a leading member of the Bolshevik party and a close ally of Vladimir Lenin. He was one of the seven members of the first Politburo, founded in 1917 to manage the Bolshevik Revolution. He was instrumental in the October Revolution, which led to the overthrow of the Russian Tsar.

Among politicians, Lev Kamenev ranks 926 out of 15,577. Before him are Cassander, Raymond Poincaré, Charles I of Hungary, Jugurtha, Lee Myung-bak, and Benjamin Harrison. After him are Jiang Qing, Chaim Weizmann, Basil II, Andrew II of Hungary, Sebastian of Portugal, and Frederick William, Elector of Brandenburg.