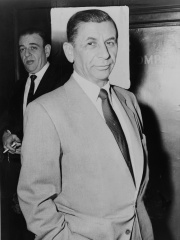 Meyer Lansky (born Meier Suchowlański; July 4, 1902 – January 15, 1983), known as the "Mob's Accountant", was an American organized crime figure of Polish birth who, along with his associate Charles "Lucky" Luciano, was instrumental in the development of the National Crime Syndicate in the United States.Associated with the Jewish mob, Lansky developed a gambling empire that stretched across the world. He was said to own points (percentages) in casinos in Las Vegas, Cuba, The Bahamas and London. Although a member of the Jewish mob, Lansky undoubtedly had strong influence with the Italian-American Mafia and played a large role in the consolidation of the criminal underworld. Read more on Wikipedia

Meyer Lansky was an American mobster who was involved in gambling, bootlegging, and the development of the National Crime Syndicate.

Among MAFIOSOS In Belarus