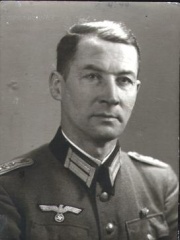 Wilhelm Adalbert Hosenfeld (German pronunciation: [ˈvɪlm ˈhoːzənfɛlt]; 2 May 1895 – 13 August 1952), originally a school teacher, was a German Army officer who by the end of the Second World War had risen to the rank of Hauptmann (Captain). He helped to hide or rescue several Polish people, including Jews, in Nazi-German occupied Poland, and helped Jewish pianist and composer Władysław Szpilman to survive, hidden, in the ruins of Warsaw during the last months of 1944, an act which was portrayed in the 2002 film The Pianist. Read more on Wikipedia

Wilhelm Hosenfeld was a German officer who helped to save the lives of many people during World War II. He helped to smuggle Jews out of Nazi-occupied Poland, and helped to save Polish children from death.

Among politicians, Wilm Hosenfeld ranks 1,205 out of 15,710. Before him are Lazar of Serbia, Claudia Octavia, Zewditu, Jefferson Davis, Maria Christina, Duchess of Teschen, and Muhammad II of Khwarazm. After him are Roh Moo-hyun, Peter II of Yugoslavia, Francesco I Sforza, Andronikos III Palaiologos, Alexander I of Serbia, and Ottokar II of Bohemia.