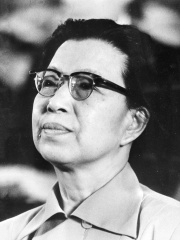 Jiang Qing (19 March 1914 – 14 May 1991), also known as Madame Mao, was a Chinese Communist Revolutionary, actress, and major political figure during the Cultural Revolution (1966–76). She was the fourth wife of Mao Zedong, the Chairman of the Communist Party and Paramount leader of China. She used the stage name Lan Ping (藍蘋) during her acting career (which ended in 1938), and was known by many other names. Read more on Wikipedia

Jiang Qing is most famous for being a member of the Gang of Four, a group of Chinese communist officials who were blamed for the excesses of the Cultural Revolution.

Among politicians, Jiang Qing ranks 1,000 out of 15,710. Before her are Margaret Theresa of Spain, Scorpion II, Jorge Rafael Videla, Robert I, Duke of Normandy, Philip III of Macedon, and Alfonso VI of León and Castile. After her are Æthelwulf, King of Wessex, Władysław III of Poland, Adolphe Thiers, William Howard Taft, Emperor Gaozong of Tang, and Jérôme Bonaparte.