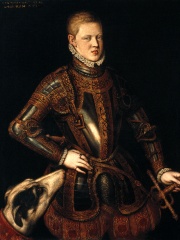 Sebastian (Portuguese: Sebastião I [sɨbɐʃˈti.ɐ̃w̃]; 20 January 1554 – 4 August 1578) was King of Portugal from 11 June 1557 to 4 August 1578 and the penultimate Portuguese monarch of the House of Aviz. He was the son of João Manuel, Prince of Portugal, and his wife, Joanna of Austria. He was the grandson of King John III of Portugal and Holy Roman Emperor Charles V. He disappeared (presumably killed in action) in the battle of Alcácer Quibir, against the Saadians of Morocco. Read more on Wikipedia

Sebastian of Portugal is most famous for his role in the Battle of Alcacer Quibir in 1578. He led the Portuguese army to victory against the Moroccan invaders.

Page views of Sebastian of Portugals by language

Among politicians, Sebastian of Portugal ranks 931 out of 15,577. Before him are Benjamin Harrison, Lev Kamenev, Jiang Qing, Chaim Weizmann, Basil II, and Andrew II of Hungary. After him are Frederick William, Elector of Brandenburg, Louis V of France, Benjamin Disraeli, Kurt Waldheim, Gustav IV Adolf of Sweden, and Park Geun-hye.

Among people born in 1554, Sebastian of Portugal ranks 2. Before him is Pope Gregory XV. After him are Elisabeth of Austria, Queen of France, Walter Raleigh, Charles, Duke of Mayenne, Philip William, Prince of Orange, Tsarevich Ivan Ivanovich of Russia, Philip Sidney, Bálint Balassi, Ernest of Bavaria, Bartolomeo Carducci, and Louis III, Duke of Württemberg. Among people deceased in 1578, Sebastian of Portugal ranks 3. Before him are Mihrimah Sultan and John of Austria. After him are Catherine of Austria, Queen of Portugal, Uesugi Kenshin, James Hepburn, 4th Earl of Bothwell, Piali Pasha, Pierre Lescot, Sebastiano Venier, Joanna of Austria, Grand Duchess of Tuscany, Pietro Andrea Mattioli, and Ferdinand, Prince of Asturias.