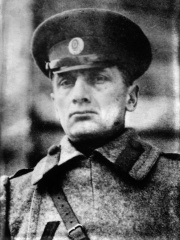 Alexander Vasilyevich Kolchak (Russian: Александр Васильевич Колчак; 16 November [O.S. 4 November] 1874 – 7 February 1920) was an Imperial Russian admiral, military leader and polar explorer who served in the Imperial Russian Navy and fought in the Russo-Japanese War of 1904–1905 and the First World War. During the Russian Civil War of 1917–1922 he established an anti-communist government in Siberia — later the Provisional All-Russian Government — and became recognised as the "Supreme Leader and Commander-in-Chief of All Russian Land and Sea Forces" by the other leaders of the White movement from 1918 to 1920. Read more on Wikipedia

Alexander Kolchak was a Russian admiral and leader of the anti-communist White Army during the Russian Civil War. He was appointed as the Supreme Ruler of Russia by the White Army in 1918, but was overthrown by the Red Army in 1920.

Among politicians, Alexander Kolchak ranks 1,186 out of 15,577. Before him are Decebalus, Jeongjong of Joseon, Galeazzo Ciano, Antiochus I Soter, Jefferson Davis, and Alexei Rykov. After him are Vajiralongkorn, Brennus, Samo, Conrad IV of Germany, Emperor Wen of Sui, and Mahmoud Ahmadinejad.