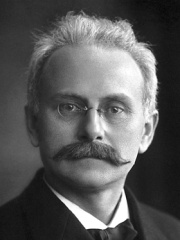 Johannes Stark (German pronunciation: [joˈhanəs ʃtaʁk] (listen), 15 April 1874 – 21 June 1957) was a German physicist who was awarded the Nobel Prize in Physics in 1919 "for his discovery of the Doppler effect in canal rays and the splitting of spectral lines in electric fields". This phenomenon is known as the Stark effect. Stark received his Ph.D. in physics from the University of Munich in 1897 under the supervision of Eugen von Lommel, and served as Lommel's assistant until his appointment as a lecturer at the University of Göttingen in 1900. Read more on Wikipedia

Johannes Stark was a German physicist who is most famous for his discovery of the "Stark effect." The Stark effect is a phenomenon in which the intensity of light is dependent on the presence of an electric field.