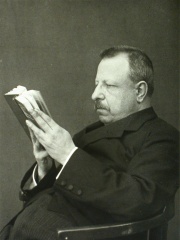 Benedetto Croce (Italian: [beneˈdetto ˈkroːtʃe]; 25 February 1866 – 20 November 1952) was an Italian idealist philosopher, historian, and politician, who wrote on numerous topics, including philosophy, history, historiography and aesthetics. In most regards, Croce was a liberal, although he opposed laissez-faire, free trade, and had considerable influence on other Italian intellectuals, including both Marxist Antonio Gramsci and Italian Fascist Giovanni Gentile.Croce was the president of PEN International, the worldwide writers' association, from 1949 until 1952. Read more on Wikipedia

Benedetto Croce was a philosopher and historian who is most famous for his philosophy of aesthetics.

Among philosophers, Benedetto Croce ranks 220 out of 1,081. Before him are Diotima of Mantinea, Ibn Tufail, Joseph de Maistre, Chilon of Sparta, Bias of Priene, and Slavoj Žižek. After him are Miguel de Unamuno, Isaiah Berlin, Baltasar Gracián, Paul Feyerabend, Giorgio Agamben, and Milarepa.