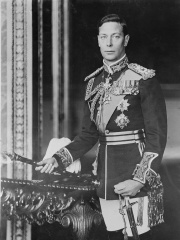 George VI (Albert Frederick Arthur George; 14 December 1895 – 6 February 1952) was King of the United Kingdom and the Dominions of the British Commonwealth from 11 December 1936 until his death in 1952. He was also Emperor of India from 1936 until 1947, when the British Raj was dissolved. Known as "Bertie" among his family and close friends, George VI was born in the reign of his great-grandmother Queen Victoria and was named after his great-grandfather Albert, Prince Consort. Read more on Wikipedia

Since 2007, the English Wikipedia page of George VI has received more than 39,463,074 page views. His biography is available in 92 different languages on Wikipedia making him the 287th most popular politician.

Among politicians, George VI ranks 284 out of 14,801. Before him are Ahmed III, Cardinal Mazarin, Bhumibol Adulyadej, Rudolf II, Holy Roman Emperor, Raúl Castro, and Alaric I. After him are Orhan, Willy Brandt, Vyacheslav Molotov, Peter III of Russia, Ali Khamenei, and Helmut Kohl.