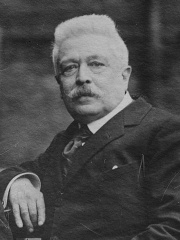 Vittorio Emanuele Orlando (19 May 1860 – 1 December 1952) was an Italian statesman, known for representing Italy in the 1919 Paris Peace Conference with his foreign minister Sidney Sonnino. He was also known as "Premier of Victory" for defeating the Central Powers along with the Entente in World War I. He was also member and president of the Constitutional Assembly that changed the Italian form of government into a Republic. Read more on Wikipedia

Among politicians, Vittorio Emanuele Orlando ranks 2,046 out of 15,710. Before him are Karl Radek, Guillaume de Nogaret, Joseph McCarthy, Astyanax, Nikola IV Zrinski, and John Sigismund, Elector of Brandenburg. After him are Cleopatra VI of Egypt, Amenemhat IV, Hans Luther, Emperor Renzong of Song, Andrew III of Hungary, and Wilhelmine Amalia of Brunswick-Lüneburg.