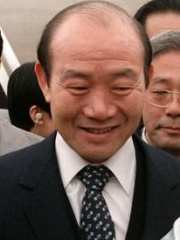 Chun Doo-hwan (Korean: 전두환; Hanja: 全斗煥; Korean pronunciation: [tɕʌnduɦwɐn] or [tɕʌn] [tuɦwɐn]; 18 January 1931 – 23 November 2021) was a South Korean politician and army general who served as the fifth president of South Korea from 1980 to 1988. He was the country's de facto leader from December 1979 to September 1980, ruling as an unelected military dictator with civilian president Choi Kyu-hah largely as a figurehead. Chun was sentenced to death in 1996 for his role in the Gwangju Massacre but was later pardoned by President Kim Young-sam, with the advice of then President-elect Kim Dae-jung, whom Chun's administration had sentenced to death some 20 years earlier. Read more on Wikipedia

Chun Doo-hwan was the president of South Korea from 1980 to 1988. He is most famous for his military coup against the government in 1979, which led to his presidency.

Among politicians, Chun Doo-hwan ranks 883 out of 15,710. Before him are Stefan Dušan, Adolf Frederick, King of Sweden, Clara Petacci, Arthur Wellesley, 1st Duke of Wellington, Marcian, and Michael II. After him are Aurangzeb, Tullus Hostilius, Balbinus, Charles XV of Sweden, Luiz Inácio Lula da Silva, and William III of the Netherlands.