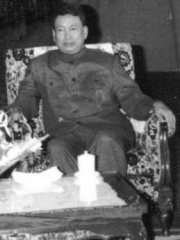 Pol Pot (born Saloth Sâr; 19 May 1925 – 15 April 1998) was a Cambodian revolutionary and politician who governed Cambodia as the Prime Minister of Democratic Kampuchea between 1975 and 1979. Ideologically a Marxist–Leninist and a Khmer nationalist, he was a leading member of Cambodia's communist movement, the Khmer Rouge, from 1963 until 1997 and served as the General Secretary of the Communist Party of Kampuchea from 1963 to 1981. Read more on Wikipedia

Since 2007, the English Wikipedia page of Pol Pot has received more than 8,126,583 page views. His biography is available in 101 different languages on Wikipedia (up from 100 in 2019). Pol Pot is the 154th most popular politician (down from 119th in 2019), the most popular biography from Cambodia and the most popular Cambodian Politician.

Pol Pot is most famous for being the leader of the Khmer Rouge, a Cambodian communist regime that ruled from 1975 to 1979. Pol Pot was responsible for the deaths of an estimated 1.7 million people through executions, starvation, and overwork.

Among politicians, Pol Pot ranks 154 out of 15,710. Before him are Francis I of France, Augusto Pinochet, Murad I, Caracalla, Joseph Goebbels, and Oliver Cromwell. After him are Henry III of France, Ho Chi Minh, Demosthenes, Batu Khan, Brutus the Younger, and Cyrus the Great.