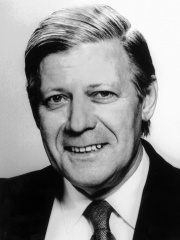 Helmut Heinrich Waldemar Schmidt (German pronunciation: [ˈhɛlmuːt ˈʃmɪt] (listen); 23 December 1918 – 10 November 2015) was a German politician and member of the Social Democratic Party of Germany (SPD), who served as the chancellor of West Germany from 1974 to 1982. Before becoming Chancellor, he served as the minister of defence (1969–1972) and the minister of finance (1972–1974) in the government of Willy Brandt. In the latter role he gained credit for his financial policies. Read more on Wikipedia

Helmut Schmidt was a German politician who served as Chancellor of West Germany from 1974 to 1982. He is most famous for his role in the Ostpolitik, which was a policy of détente with the Soviet Union and Eastern Bloc countries.

Among politicians, Helmut Schmidt ranks 910 out of 15,577. Before him are Şah Sultan, Władysław III of Poland, Artaxerxes II of Persia, Ptolemy V Epiphanes, Gojong of Korea, and Julius Streicher. After him are Andronikos II Palaiologos, Fahd of Saudi Arabia, Hafizullah Amin, Cambyses I, John Quincy Adams, and Elisabeth of France.