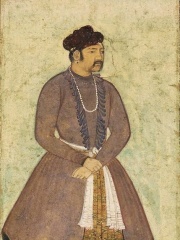 Abu'l-Fath Jalal-ud-din Muhammad Akbar (Persian: ابو الفتح جلال الدين محمد اكبر; October 1542– 27 October 1605), popularly known as Akbar the Great, (Akbar-i-azam اکبر اعظم), and also as Akbar I (IPA: [əkbər]), was the third Mughal emperor, who reigned from 1556 to 1605. Akbar succeeded his father, Humayun, under a regent, Bairam Khan, who helped the young emperor expand and consolidate Mughal domains in India. A strong personality and a successful general, Akbar gradually enlarged the Mughal Empire to include much of the Indian subcontinent. Read more on Wikipedia

Since 2007, the English Wikipedia page of Akbar has received more than 8,615,287 page views. His biography is available in 136 different languages on Wikipedia making him the 127th most popular politician.

Page views of Akbars by language