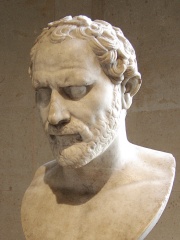 Demosthenes (; Greek: Δημοσθένης, romanized: Dēmosthénēs; Attic Greek: [dɛːmosˈtʰenɛːs]; 384 – 12 October 322 BC) was a Greek statesman and orator in ancient Athens. His orations constitute a significant expression of contemporary Athenian intellectual prowess and provide insight into the politics and culture of ancient Greece during the 4th century BC. Demosthenes learned rhetoric by studying the speeches of previous great orators. He delivered his first judicial speeches at the age of 20, in which he successfully argued that he should gain from his guardians what was left of his inheritance. Read more on Wikipedia

Demosthenes was a Greek statesman and orator. He is best known for his speeches against the king of Persia, Philip II of Macedon, and the Athenian politician and general, Alexander the Great.

Page views of Demosthenes by language

Among politicians, Demosthenes ranks 168 out of 15,577. Before him are William I, German Emperor, Skanderbeg, Rodrigo Duterte, Alexander I of Russia, Pol Pot, and Catherine I of Russia. After him are Batu Khan, Joanna of Castile, A. P. J. Abdul Kalam, Henry III of France, Akbar, and Reinhard Heydrich.