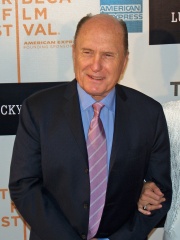 Robert Selden Duvall (; born January 5, 1931) is an American actor and filmmaker. His career spans more than seven decades and he is considered one of the greatest American actors of all time. He is the recipient of an Academy Award, four Golden Globe Awards, a BAFTA Award, two Primetime Emmy Awards and a Screen Actors Guild Award. Duvall began appearing in theater in the early 1950s, moving into television and film roles during the early 1960s, playing Boo Radley in To Kill a Mockingbird (1962) and appearing in Captain Newman, M.D. Read more on Wikipedia

Robert Duvall is most famous for his role as Tom Hagen in the Godfather trilogy.