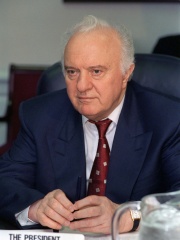 Eduard Ambrosis dze Shevardnadze (Georgian: ედუარდ ამბროსის ძე შევარდნაძე, romanized: Eduard Ambrosis dze Shevardnadze; 25 January 1928 – 7 July 2014) was a Georgian politician and diplomat who ruled Georgia from 1972 until his resignation in 2003. He was the Minister of Foreign Affairs of the Soviet Union from 1988 to 1990. In 1992 he become the leader of Georgia (as Chairman of Parliament) after president Zviad Gamsakhurdia resigned. Read more on Wikipedia

Shevardnadze was Minister of Foreign Affairs for the Soviet Union and then for independent Georgia. He is most famous for his role in the end of the Cold War and the dissolution of the Soviet Union.

Among politicians, Eduard Shevardnadze ranks 595 out of 15,710. Before him are Tahmasp I, Władysław II Jagiełło, Darius II, Philip the Arab, Alija Izetbegović, and Philip the Good. After him are Leo III the Isaurian, Wilhelmina of the Netherlands, Ion Antonescu, Frederick William IV of Prussia, Władysław IV Vasa, and Christian IX of Denmark.