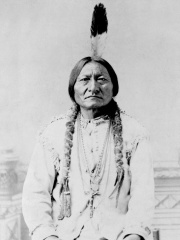 Sitting Bull (Lakota: Tȟatȟáŋka Íyotake [tˣaˈtˣə̃ka ˈi.jɔtakɛ]; c. 1831 – December 15, 1890) was a Hunkpapa Lakota leader who led his people during years of resistance against United States government policies. He was killed by Indian agency police on the Standing Rock Indian Reservation during an attempt to arrest him, at a time when authorities feared that he would join the Ghost Dance movement.Before the Battle of the Little Bighorn, Sitting Bull had a vision in which he saw many soldiers, "as thick as grasshoppers", falling upside down into the Lakota camp, which his people took as a foreshadowing of a major victory in which many soldiers would be killed. About three weeks later, the confederated Lakota tribes with the Northern Cheyenne defeated the 7th Cavalry under Lt. Read more on Wikipedia

Sitting Bull was a Hunkpapa Lakota Sioux chief who led his people as a war leader in the Great Sioux War of 1876-1877. He was killed on December 15, 1890, by Indian police on the Standing Rock Indian Reservation.

Among politicians, Sitting Bull ranks 432 out of 15,577. Before him are Rurik, Goliath, Eduard Shevardnadze, Shivaji, Sigismund III Vasa, and Idi Amin. After him are Menes, Menkaure, Horemheb, Moon Jae-in, James II of England, and António Guterres.

Among people born in 1831, Sitting Bull ranks 3. Before him are James Clerk Maxwell and Frederick III, German Emperor. After him are Helena Blavatsky, John Stith Pemberton, Emperor Kōmei, Xianfeng Emperor, James A. Garfield, Cheoljong of Joseon, Leo von Caprivi, Richard Dedekind, and Savitribai Phule. Among people deceased in 1890, Sitting Bull ranks 4. Before him are Vincent van Gogh, Heinrich Schliemann, and Carlo Collodi. After him are César Franck, William III of the Netherlands, Amadeo I of Spain, Gyula Andrássy, Duchess Helene in Bavaria, Henri Nestlé, Joseph Merrick, and Richard Francis Burton.