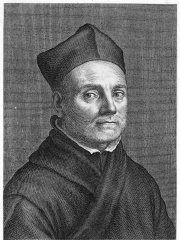 Athanasius Kircher (2 May 1602 – 27 November 1680) was a German Jesuit scholar and polymath who published around 40 major works, most notably in the fields of comparative religion, geology, and medicine. Kircher has been compared to fellow Jesuit Roger Joseph Boscovich and to Leonardo da Vinci for his enormous range of interests, and has been honoured with the title "Master of a Hundred Arts". He taught for more than 40 years at the Roman College, where he set up a wunderkammer. Read more on Wikipedia

Athanasius Kircher is most famous for his work in the fields of mathematics, geology, and Egyptology. He was a polymath who published over forty books.

Among philosophers, Athanasius Kircher ranks 189 out of 1,081. Before him are Posidonius, Hippasus, Han Fei, Jakob Böhme, Muhammad Abduh, and Sextus Empiricus. After him are Melissus of Samos, Pseudo-Dionysius the Areopagite, Ernest Renan, Pierre Bayle, John Scotus Eriugena, and Nicolas Malebranche.