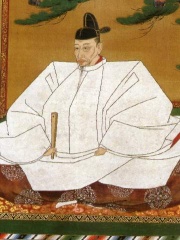 Toyotomi Hideyoshi (豊臣 秀吉, 2 February 1536 – 18 September 1598) was a Japanese samurai and daimyo (feudal lord) of the late Sengoku period regarded as the second "Great Unifier" of Japan.Hideyoshi rose from a peasant background as a retainer of the prominent lord Oda Nobunaga to become one of the most powerful men in Japan. Hideyoshi succeeded Nobunaga after the Honnō-ji Incident in 1582 and continued Nobunaga's campaign to unite Japan that led to the closing of the Sengoku period. Hideyoshi became the de facto leader of Japan and acquired the prestigious positions of Chancellor of the Realm and Imperial Regent by the mid-1580s. Read more on Wikipedia

Toyotomi Hideyoshi was a Japanese samurai and politician of the Sengoku period who is most famous for his conquest of Korea, his unsuccessful invasion of Ming China, and his role in the unification of Japan.

Among politicians, Toyotomi Hideyoshi ranks 395 out of 15,710. Before him are Louis X of France, Javier Pérez de Cuéllar, Willy Brandt, Tiberius Gracchus, Woodrow Wilson, and Richard II of England. After him are Theodoric the Great, Galerius, Leopold I of Belgium, Miklós Horthy, Orhan, and William III of England.