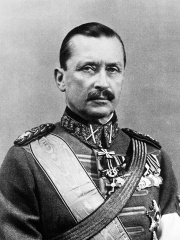 Baron Carl Gustaf Emil Mannerheim (Swedish pronunciation: [kɑːɭ ˈɡɵ̂sːtav ˈěːmɪl ˈmânːɛrˌhɛjm], Finland Swedish: [kɑːrl ˈɡʉstɑv ˈeːmil ˈmɑnːærˌhejm] (listen); 4 June 1867 – 27 January 1951) was a Finnish military leader and statesman. He served as the military leader of the Whites in the Finnish Civil War of 1918, as Regent of Finland (1918–1919), as commander-in-chief of Finland's defence forces during the period of World War II (1939–1945), as Marshal of Finland (1942–), and as the sixth president of Finland (1944–1946). The Russian Empire dominated the Grand Duchy of Finland before 1917, and Mannerheim made a career in the Imperial Russian Army, rising by 1917 to the rank of lieutenant general. Read more on Wikipedia

Carl Gustaf Emil Mannerheim was a Finnish military officer and statesman. He served as the military leader of the Whites in the Finnish Civil War and Commander-in-Chief of Finland's defense forces during World War II.

Among politicians, Carl Gustaf Emil Mannerheim ranks 407 out of 15,710. Before him are William III of England, Radovan Karadžić, Moctezuma II, Mithridates VI of Pontus, Rüstem Pasha, and Charles I of England. After him are Charles IV of France, Mahmud I, Servius Tullius, Henry the Fowler, Rurik, and Taejo of Joseon.