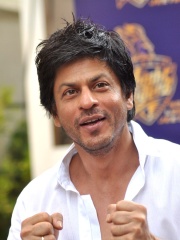 Shah Rukh Khan (pronounced [ˈʃɑːɦɾʊx xɑːn]; born 2 November 1965), also known by the initialism SRK, is an Indian actor, film producer, and television personality who works in Hindi films. Referred to in the media as the "Baadshah of Bollywood", "King of Bollywood" and "King Khan", he has appeared in more than 80 films, and earned numerous accolades, including 14 Filmfare Awards. He has been awarded the Padma Shri by the Government of India, as well as the Ordre des Arts et des Lettres and Legion of Honour by the Government of France. Read more on Wikipedia

Shah Rukh Khan is most famous for his acting career. He is one of the most successful actors in India and is known for his appearances in films such as Dilwale Dulhania Le Jayenge, Dil To Pagal Hai, Kuch Kuch Hota Hai, and Swades.