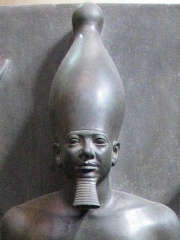 Menkaure (also Menkaura, Egyptian transliteration mn-k3w-Rˁ), was an ancient Egyptian king (pharaoh) of the fourth dynasty during the Old Kingdom, who is well known under his Hellenized names Mykerinos (Greek: Μυκερῖνος) (by Herodotus) and Menkheres (Greek: Μεγχέρης) (by Manetho). According to Manetho, he was the throne successor of king Bikheris, but according to archaeological evidence, he was almost certainly the successor of Khafre. Africanus (from Syncellus) reports as rulers of the fourth dynasty Sôris, Suphis I, Suphis II, Mencherês, Ratoisês, Bicheris, Sebercherês, and Thamphthis in this order. Read more on Wikipedia

Page views of Menkaures by language

Among politicians, Menkaure ranks 434 out of 15,577. Before him are Eduard Shevardnadze, Shivaji, Sigismund III Vasa, Idi Amin, Sitting Bull, and Menes. After him are Horemheb, Moon Jae-in, James II of England, António Guterres, William III of England, and Louis VII of France.