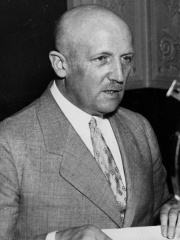 Kurt Ferdinand Friedrich Hermann von Schleicher (pronounced [kʊʁt fɔn ˈʃlaɪ̯çɐ] (listen); 7 April 1882 – 30 June 1934) was a German general and the last chancellor of Germany (before Adolf Hitler) during the Weimar Republic. A rival for power with Hitler, Schleicher was murdered by Hitler's SS during the Night of the Long Knives in 1934. Schleicher was born into a military family in Brandenburg an der Havel on 7 April 1882. Entering the Prussian Army as a lieutenant in 1900, he rose to become a General Staff officer in the Railway Department of the German General Staff and served in the General Staff of the Supreme Army Command during World War I. Read more on Wikipedia

Kurt von Schleicher was a German general and politician who served as Chancellor of Germany from 1932 to 1933. He was appointed Chancellor by President Paul von Hindenburg, and served until Adolf Hitler took power in 1933.

Among politicians, Kurt von Schleicher ranks 790 out of 15,710. Before him are Béla IV of Hungary, Harold Wilson, James V of Scotland, Childeric I, Baudouin of Belgium, and Zeno. After him are John III of Sweden, Jovian, John I Tzimiskes, Jeroboam, Ælla of Northumbria, and Cato the Younger.