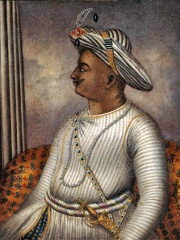 Tipu Sultan (born Sultan Fateh Ali Sahab Tipu, 1 December 1751 – 4 May 1799), also known as the Tiger of Mysore, was the ruler of the Kingdom of Mysore based in South India. He was a pioneer of rocket artillery. He introduced a number of administrative innovations during his rule, including a new coinage system and calendar, and a new land revenue system, which initiated the growth of the Mysore silk industry. Read more on Wikipedia

Tipu Sultan was a Muslim ruler of the Kingdom of Mysore. He is most famous for his military exploits, which included a series of conflicts with the British East India Company.

Among politicians, Tipu Sultan ranks 1,462 out of 15,577. Before him are Baldwin V of Jerusalem, Karađorđe, Robert Ley, Marie of Romania, Kim Young-sam, and Ernest I, Duke of Saxe-Coburg and Gotha. After him are Tristan, Maria II of Portugal, Sophia Alekseyevna of Russia, Christopher of Bavaria, Symon Petliura, and Carol I of Romania.