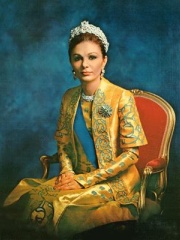 Farah Pahlavi (Persian: فرح پهلوی‎, née Farah Diba (فرح دیبا‎); born 14 October 1938) is the widow of the last Shah of Iran, Mohammad Reza Pahlavi, and was the Shahbanu (empress consort) of Iran from 1959 to 1979. She was born into a prosperous family whose fortunes were diminished after her father's early death. While studying architecture in Paris, France, she was introduced to the Shah at the Iranian embassy, and they were married in December 1959. Read more on Wikipedia

Farah Pahlavi is most famous for being the wife of the Shah of Iran. She was the Empress of Iran from 1967 to 1979.

Among politicians, Farah Pahlavi ranks 664 out of 15,710. Before her are Nursultan Nazarbayev, Giuseppe Mazzini, Vladislaus II of Hungary, Gwangjong of Goryeo, Robert Gascoyne-Cecil, 3rd Marquess of Salisbury, and Gaius Cassius Longinus. After her are Sweyn Forkbeard, Henry VI, Holy Roman Emperor, George Marshall, Henry I of France, Sennacherib, and Abd al-Rahman III.

Among people born in 1938, Farah Pahlavi ranks 10. Before her are Beatrix of the Netherlands, Claudia Cardinale, Rudolf Nureyev, Adriano Celentano, Jon Voight, and Queen Sofía of Spain. After her are Christopher Lloyd, Nico, Jerry Brown, Anthony Giddens, Alberto Fujimori, and Islam Karimov.