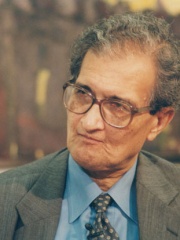 Amartya Kumar Sen (Bengali pronunciation: [ˈɔmort:o ˈʃen]; born 3 November 1933) is an Indian economist and philosopher, who since 1972 has taught and worked in the United Kingdom and the United States. Sen has made contributions to welfare economics, social choice theory, economic and social justice, economic theories of famines, decision theory, development economics, public health, and measures of well-being of countries. He is currently Thomas W. Lamont University Professor, and Professor of Economics and Philosophy at Harvard University. Read more on Wikipedia

Amartya Sen is a Nobel Prize-winning economist who is most famous for his work on the causes of famine. He argues that famines are not caused by food shortages, but by a lack of democracy and freedom.

Among ECONOMISTS In India