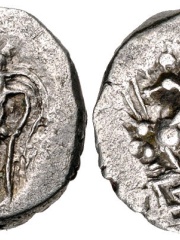 Harshavardhana (IAST Harṣa-vardhana; c. 590–647 CE) was a Pushyabhuti emperor who ruled northern India from 606 to 647 CE. He was the son of Prabhakaravardhana who had defeated the Alchon Huna invaders, and the younger brother of Rajyavardhana, a king of Thanesar, present-day Haryana. At the height of Harsha's power, his territory covered much of north and northwestern India, with the Narmada River as its southern boundary. He eventually made Kanauj (in present Uttar Pradesh state) his capital, and ruled till 647 CE. Read more on Wikipedia

Harsha is most famous for his literary work, Harshacharita, which is a biography of the Hindu king Harsha.

Page views of Harshas by language

Among politicians, Harsha ranks 1,412 out of 15,577. Before him are John IV of Portugal, Miguel Primo de Rivera, Paul Barras, U Thant, Philip of Swabia, and Léon Blum. After him are Anthemius, John V of Portugal, Alexander I of Serbia, Arghun, Charles III of Naples, and Turgut Özal.