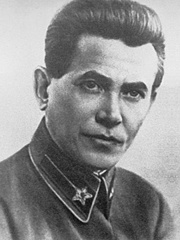 Nikolay Ivanovich Yezhov (Russian: Николай Иванович Ежов, IPA: [nʲɪkɐˈɫaj ɪˈvanəvʲɪt͡ɕ (j)ɪˈʐof]; 1 May 1895 – 4 February 1940) was a Soviet secret police official under Joseph Stalin who was head of the NKVD from 1936 to 1938, during the height of the Great Purge. Yezhov organized mass arrests, torture and executions during the Great Purge but fell from Stalin's favour and was arrested, confessing after torture to a range of anti-Soviet activity. Read more on Wikipedia

Nikolai Yezhov was the head of the NKVD, the Soviet Union's secret police force, from 1936 to 1938. He is most famous for the Great Purge of 1937-1938, during which he orchestrated the arrests and executions of more than 1.5 million people.

Among politicians, Nikolai Yezhov ranks 762 out of 15,710. Before him are Charles VII, Holy Roman Emperor, Artemisia I of Caria, Merovech, Georgy Malenkov, Árpád, and Charles IV of Spain. After him are Chandragupta Maurya, William I of the Netherlands, Michael I of Romania, Nicolas Sarkozy, Valéry Giscard d'Estaing, and Balian of Ibelin.